Our patented Asexual Reproduction Method, developed by our founder and President, Zhiguo Wang,  accelerates the commercial viability of a yew tree, so that it is able to be used for commercialization starting in approximately three years, compared to more than 50 years for naturally grown yew trees.  Through this method, we are able to more than replenish the number of yew trees we cultivate and put into production.   The Patent is valid through September 29, 2030. 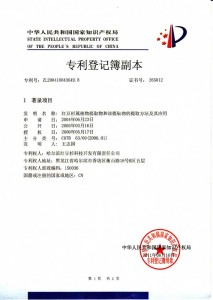