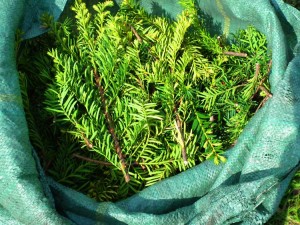 Branches and Leaves for TCM

In December 2009, Yew Pharmaceutical received authorization from HFDA approving the sale of a yew-based TCM as a secondary treatment of cancer and certain other disorders, including uric disorders, certain liver diseases and menstrual discomfort. This TCM, sold under the brand name Zi Shan, has been approved to be sold under both prescription and over-the-counter drug categories. We also believe that Zi Shan may provide general beneficial effects on overall health. According to the Quintessence of Materia Medica, published in August 2006 by the Chinese Academy of Medical Sciences – Institute of Medicinal Plants, the Northeast yew plays a role as a diuretic, detumescence and in restoring menstrual flow. The approval from HFDA allows Yew Pharmaceutical to sell Zi Shan throughout the PRC.

TCMs utilize a range of therapies, often adjunctive to Western treatment including herbs, diet, massage, osteopathic manipulation, breathing, deep relaxation and exercise (chi gong) in a holistic approach. We sell processed yew leaves and branches to TCM maker Yew Pharmaceutical (12% of our consolidated revenue), to make into powder which they sell under the brand name Zi Shan, both prescription and OTC throughout the PRC.