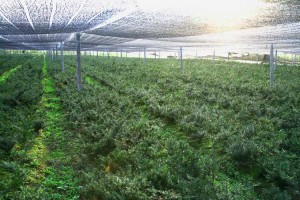 Since 1996, we have grown Japanese yew trees (also referred to in China as Northeast yew trees), taxus cuspidata, on mountain hillsides near Harbin and cultivate them in four nurseries we operate near Harbin. We have successfully cultivated more than eight million yew nursery seedlings in four nurseries. These nurseries occupy approximately 19,759 Mu (approximately 2,957 acres) of forested land. We currently have the capacity to grow up to two million yew nursery seedlings annually. We also have contractual rights to use an additional 1,000,000 Mu (approximately 166,667 acre) site in Wuchang, which land we currently do not utilize, for future expansion of our yew tree growing operations.

Northeast yew trees grow well in the climate of Northeast China. Using our patented Asexual Reproduction Method, developed by our founder and President, Zhiguo Wang, based on principles of asexual propagation and cloning, we can bring yew trees to maturity and commercialize them in as little as two-to-three years, compared to more than 50 years of maturity period for naturally grown yew trees. We believe that utilizing the Asexual Reproduction Method addresses an imbalance between supply and demand for yew trees, both for reforestation and use in the production of cancer-fighting TCM.

Yew trees are scarce and, traditionally, it takes a long time to bring them to commercialization. It can take more than 50 years for a yew tree to mature naturally for pharmaceutical use. Our Asexual Reproduction Method shortens this period significantly. We begin with cuttings from natural yew trees, which we transplant at our nurseries. By using our Asexual Reproduction Method, the success rate of maturation is enhanced and in approximately two-to-three years the yew tree is able to be used for commercialization. We use some trees in their entirety and parts of other yew trees that we need and take the rest of the tree itself back to the forest to finish full growth to maturity in 10-15 years, creating a new generation of mature yew trees.